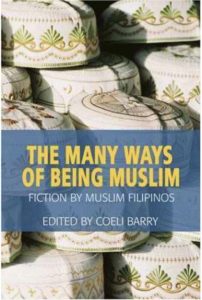 During my brief stint as a college teacher, one of the subjects I handled was Philippine Literature. In an effort to show that our regions are rich in stories, one of the places I looked to was Mindanao. Having visited the islands before, I wanted my students to go beyond the vistas, the durian and the kris, and see who the Muslim Filipino is. The story I assigned for discussion was “Blue Blood of the Big Astana” by Ibrahim Jubaira, whose story is the most frequently included in anthologies.

As I recall, the discussion went well in one class; however, I was struck by a student’s comment that he wished there were more stories of Muslim Filipinos, as he apparently had distant relations in Mindanao. I can still remember how he wistful he looked, his eyes eloquent with the unexpressed questions in his search for family and identity.

One of the books that could have helped him was released by Anvil Publishing, Inc.. Titled “The Many Ways of Being Muslim: Fiction by Muslim Filipinos” and edited by Coeli Barry, this landmark collection brings together a range of short fiction written by Muslim Filipinos over nearly seven decades, beginning in the 1940s. As these stories reflect, Muslims in the predominantly Catholic Philippines have helped define the contemporary Filipino identity and intellectual life in rich and varied ways.

These 22 stories provide the reader with glimpses of various facets of the Muslim Filipino. From the ironic yet humorous twist in Jubaira’s tale of “Bird in a Cage”, the tragic reality that usually winds up as headline fodder of Elin Anisha Guro’s “The Homecoming”, to the clash of tradition with modern times in “Panggud” by Calbu Asain, this collection of tales show how political conflict, uneven economic development and socio-cultural and religious movements underscore the forces that shaped the development of fiction writing from this region.

As to how ‘Muslim’ this collection of writing is, Barry notes in her Introduction: “The ways in which Muslim identities are revealed in this volume is related to the complex ways members of this minority have assimilated themselves or been kept apart from dominant cultural and political life in the Philippines. Muslim Filipino identities are not uncontested, least of all by those who embrace them, nor are they fixed across time. The writers of this anthology demonstrate the diversity of meanings being Muslim Filipino can have.”