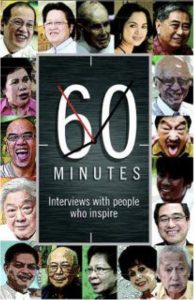 In the course of living the modern life, it is so easy to e caught up in the busyness of the rat race, of making a living, or simply making it to the next day, and the day after. It is all too easy to lose sight of the bigger picture, and have our humanity diminished by the routine we fall into.

It is the idea of having someone to look up, to be inspired to achieve a better version of one’s self that helped provide the germ behind the book 60 Minutes: Interviews with people who inspire.

Released under Anvil Publishing, “60 Minutes” began life as a Sunday column in the Manila Bulletin’s Students and Campuses section.

“As ’60 Minutes’ endeavors to feature Filipinos who can inspire and rouse the younger generation to be the best that they can be, we took it upon ourselves to present the journeys of the people who have done well in their respective fields, be it in government, business, media, the academe, the arts and sciences, and showbiz!”

The book tells the stories from a wide selection of extraordinary Filipinos. There’s tycoon John Gokongwei, Jr., whose advice include “Feet on the ground and dream. You have to build it brick by brick. Don’t just jump. Those who jump don’t last long.” National Artists Virgilio Almario and Bienvenido Lumbera discussed language and the function of education while sharing their observations on literature, while actress/chef Judy Ann Santos mused about new beginnings as she talked about her love for continuous learning, on juggling acting while studying, and the value of work and saving for the future.

Mendoza notes that “behind these personalities are great stories; from crazy mishaps to moments of great triumph and mini tell-alls!”

By reading these stories of fears, hopes, of dreams, defeats and triumphs, readers can hopefully pick up valuable life lessons within the pages of this book.