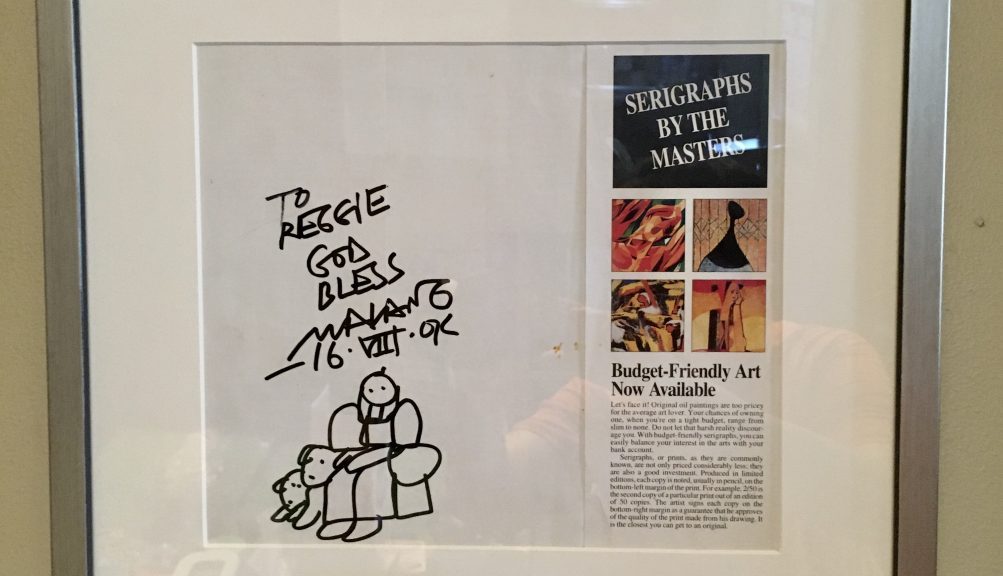 Mars got a call from West Gallery, saying our framed paintings were ready for pick-up.  We left in the morning, reaching the gallery around lunchtime. We went through the mandatory health checks at the entrance, along with logging our contact tracing details, then climbed the stairs to the second floor.

We met Ate Sol in the gallery office, where she verified our Job Order sheets, and went to another room to retrieve our newly-restored and framed artworks. Two of these belonged to Mars’ Tita Dee, and they were fantastically restored by the ArtDoc, Claire Armedilla. Then, Ate Sol came back with MY precious: a sketch signed by National Artist Mauro “Malang” Santos. It came together with a certificate of authenticity signed by Soler, one of Malang’s sons, and himself a noted painter.

As an untitled sketch, the Malang came about during a sales event by Filinvest Land, “Brentville Meets Malang”. Designed to showcase the Brentville township in Mamplasan, Binan, Laguna, the event drew both art enthusiasts and potential home buyers to the venue.  Malang was also there, along with an exhibit of his numbered and signed serigraph series of women vendors.  Back then, one serigraph goes for only Php5,000.00; now, twenty years later, it goes from Php60,000.00 up.

Since I and the rest of the Corp.Comm. office staff were involved in the event, we just brought whatever paper we could, in the hopes of getting an autograph from Malang during a lull in the set up before the event opening. Some of the Account Executives (AEs) asked for a photo with the Master, to which he graciously obliged. That broke the dam: the rest of the staff clustered around Malang, clutching an assortment of items to be signed. One of our graphic artists brought his undergrad thesis on Malang, which the latter closely perused before making a quick sketch on one of its pages and signing it.

Since I didn’t have anything handy, I simply grabbed one of the product flyers of West Gallery. Flipping it over to its blank coated side, I approached Malang and asked for his autograph. Wielding a Pentel pen, he quickly drew a woman vendor, and put a dog beside her. “Ay, bakit mag-isa lang siya?,”(“Oh, why is she all by himself?”) I blurted out, upon seeing the lone canine. He paused, looked at me, and said, “Sige, bigyan natin siya ng kalaro,” (“Very well, let’s give him a playmate”) and added a puppy beside the dog. He then asked for my name, how it’s spelled, signed, and dated the sketch, and handed it back to me with a smile.

And twenty years later, I am finally holding a properly framed Malang, complete with its certificate of authenticity.

As the art critic and writer Cid Reyes said, “Art speaks for itself”. I look at Malang’s sketch.  And I see, beyond the whimsical lines, how he cared enough to give the dog a puppy as its companion for all time.